This Birch Tree is my first indicator of the changing seasons.  This past year a male Robin used this tree to sit and share his mating call starting in March and not ending until June.   This little Robin’s song brought me into a deeper focus of this tree and initiated research on the possible benefits and uses of birch.

Birch trees grow near water and they are a tree that is the first to appear in toxic soils.  It is known for cleaning toxicity out of and area allowing for second growth of other species to grow and survive.  A street in our neighborhood has an underground creek that travels through it towards the ocean and Birch trees line the streets along this water way making it easy to gather bark, leaves, buds and twigs.   Some of these Birch Trees look as though they could be strong and healthy however they are scared by human behaviors.  Cuttings into the tree and poor limb removal.  If I where to asses this street for a client I would have them consider the significance of the appearance of these trees.  It would represent the relationships in the area.

Pictured below are the leaves, buds and twigs picked, from the tree that hangs over my fence and looks pristine, to dry for tea’s, tinctures and infused oils. 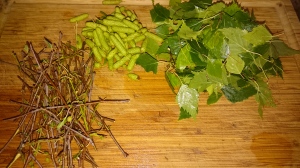 There is also a mushroom that grows mostly on Birch Trees that can be gathered for it’s medicinal benefits.  This mushroom is called a Chaga Mushroom and it is commonly made into tea.  A Chaga Mushroom does not have the usual characteristics of mushrooms.  It’s appearance is more like a growth.  This fungus is pictures below: 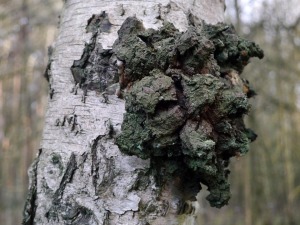 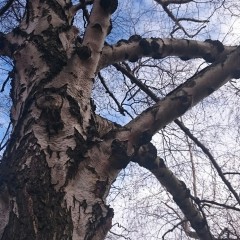 Some of the ways I have been integrating White Birch into my lifestyle is through creating:

In researching the qualities of the different parts of the Birch Tree I have read that it has properties that stimulates the digestive system, aids in better digestion and is effective in strengthening the bones and boosting overall immunity. These trees contain Betulin which can be turned into Betulinic acid, however Betulinic acid also exists in Birch Bark naturally.  Betulin is ant-inflammatory, antibacterial, antiviral and a cell regenerative and contains astringent, laxative, and diuretic properties.  Betulinic acid is currently being researched as treatments for the herpes viruses, for AIDS, skin cancer and brain tumors.  The herpes viruses cause cold sores, genital infections, chickenpox, shingles, infectious mononucleosis, and are thought to play a role in multiple sclerosis and Karposi’s sarcoma.

It has been suggested that the Birch Tree properties help in eliminating cellulite from the body and treats problems like obesity over time.

The sap from the birch tree contains vitamins; C and B, minerals, glucose and fructose.  The sap is rich in potassium, calcium, magnesium, manganese, zinc, phosphorous, iron, sodium, and amino acids.

The buds of the Birch Tree are a rich source of vitamin C, tannin, and flavonoids, and there are articles that suggest they are effective in the prevention of viral infections and even the formation of cancer. They also help increase urination and help in flushing out toxins, uric acid, and excess water from the body maintaining good kidney and liver health.

The leaves and twigs of the Birch Tree  can be used in treating inflammations and infections of the urinary tract, arthritis, high cholesterol, heart and kidney edema, cystitis and skin conditions like eczema, dermatitis and other skin irritations. They can be used to strengthen hair roots and as a dandruff treatment. 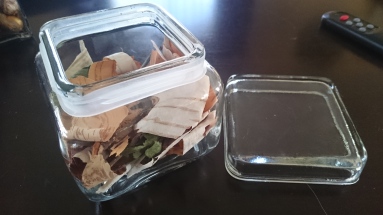 Birch Bark is like a strong paper material that lasts forever, even after the rest of it’s tree has long returned to the soil the bark remains.  For this reason Birch Bark is being studied for anti aging properties.  It is also a focus in cancer research.  Taken internally Birch Bark  aids in purification of the blood, conditions of diarrhea, canker sores in the mouth and to expels worms.  Birch Bark  has anti-inflammatory qualities so can be applied externally for joint and muscle pain.   I  make tea and water infusion of Birch Bark to take internally and to use as a wash.

The Chaga Mushroom pictured above is a fungus that  grows on the bark of  hardwood trees like Birch and Beech Tree.  Chaga is  often made into  tea and is considered a coffee substitute. It is unusual in the mushroom world as it resembles porous wood and is black and hard – similar to lumpy charcoal.

The variety that is found on birch is believed to be the most potent medicinally because of its high concentration of betulinic acid which is toxic to cancer cells. To find out more on the medicinal benefits of Chaga read  or download pdf – Healing Powers of Chaga

I have read that Chaga (King of Medicinal Mushrooms)  is  higher in antioxidants foods  than acai, pomegranates and blueberries and that it has more capacity to wipe out free radicals.  Apparently it is the most powerful  and concentrated antioxidant known on this planet and is available in capsule form.   The National Cancer Institute explains: “Antioxidants protect cells from damage caused by unstable molecules known as free radicals.”

I pick Birch Tree leaves, buds and twigs in late spring, early summer when they are light green and before the bud begins to turn to seed.  The Birch Bark is harvested when the sap starts running before the leaves form.

In Fall and Winter before sap starts running.

I am interested in Birch Oil for its potential in these areas:

I am interested in Birch Sap for the use as a cleansing tonic and for creating a natuarl syrup.

4/ 5 leaves per cup of boiling water

Traditional uses and properties of herbs are for educational purposes only.  This information is not intended to diagnose, treat, cure, or prevent any disease.  Every attempt has been made for accuracy, but none is guaranteed. Any serious health concerns or if you are pregnant, you should always check with your health care practitioner before self-administering herbs.

Messages of the Flowers

“Then gather a wreath from the garden bowers, And tell the wish of thy heart in flowers.” (Edward Elgar, 1872)

Be the Master Creator of your 2022 experience

If anything, we have learned life and lifestyles do not remain the same. Since 2020 the lesson has been changeability in all avenues of living. The changes have been so great that there is no going back to “normal.” The new normal is innovation. Any meaningful change begins when you notice what you would like […]